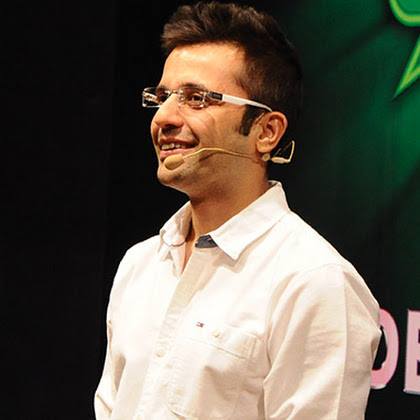 Sandeep Maheshwari is one of the best motivational speakers and YouTuber who faced a lot of struggles but always believed in himself & managed to go ahead to achieve success, happiness, and satisfaction in his life. This blog is about the Real-life story of Sandeep Maheshwari.

Like all other young people, he also belongs to a middle-class family which also have some unclear dreams and vision for his life. Once he managed to find the correct meaning of his life, and then he never turned back.

He failed so many times in his life. But, never gave away. Instead, he proved himself to be a perfect example of courage and determination. Sandeep always believed in his dreams and lived it. He kept on learning from his mistakes and moving forward and never looked back, finally establishing himself as a Successful personality in terms of health, wealth, and prosperity.

He was born in New Delhi on 28 September 1980. When he was very young his father gifted him his 2 wheeler, on which he used to travel across Delhi. By doing this, he got the experience and learned about real situations. He started earning money at a very young age by renting a scooter. And his father was surprised. Later, this turned out to be his short-term business and he started making money out of it.

At the age of 19 years, his father who used to run an aluminum business. His family had to face a tough time. Thus, the responsibility of managing and running the household shifted to Maheshwari’s head.

In the year 1999, he worked with a good business partner and organized a new year bash party. He did all the hard work he could and named the event as Dix2000. The share of the profit would be distributed equally into two parts that were already pre decided. But, Unfortunately When the party came to an end, he came to know that he was fooled. The other partner ran away with all the money. He tried calling him many times, but his partner had switched off his phone. His Partner never contacted Sandeep. He came back home and waited for something important to happen in his life.

After dropping out in B.com 3rd year from Kirori Mal College( known as Delhi University), he decided to help the struggling models to live in better conditions. So he can feel their pain and want to reduce the financial burden faced by them.

He had lots of talent, he did so much hard work, he started making the portfolio of models at reasonable rates. But, soon he realized that the companies were looking for renowned and brand named photography of models. Due to which he made him think of creating a world record.

Awards and Honors in the life of Sandeep Maheshwari

He has won many awards and recognitions. The award of the Young Creative Entrepreneur Award by the British Council and Star Youth Achiever Award by the Global Youth Marketing Forum was won by him.

He made a World Record in Photography.

“Money is as important, as is petrol in a car, not more, not less.”

“Success always hugs you in private..! But failure always slaps you in the public..! That’s Life.”

His best Inspirational and Motivational Books include

For more interesting inspirational stories check out here. All the best !! Success is waiting for you, Go and Grab it. You can also read about businesses you can do with your hobbies lying within our category Earn from Hobbies or You can go through other career options here. Don’t forget to like and follow us on Facebook and Instagram.